Our children's fear... on a global level.

I heard a story today that I felt I had to share with you. Through connections I know this is very much a real story.
I know of a girl who’s in her early teens, from a good background, good head on her shoulders, really bright, pretty and with the world in front of her.
Suddenly, to the shock of everyone, her system started to fail, her organs started to shut down, for no other reason than because she had stopped eating. Upon hearing about this most people’s reaction is the same as my initial one, that people stop eating, or have any eating disorder because of self esteem issues or self image problems. So many articles on line today are talking about how much harm Barbie is doing to girls everywhere, because of her waistline. But I found out today that there were no such issues with this girl. It turns out that the reason behind her stopping eating was because she was so aware of all the problems with our food that she didn’t want to eat something that would do her harm. It was an issue of fear and it turns out, more and more of our children are going down this route.
Sounds crazy, but for a young teen it makes sense. You have her being told that wheat, sugar, salt, and processed foods are all really bad for you, meat is filled with toxins, and don’t drink anything from a plastic bottle. There’s arguments against fresh vegetables and fruit, unless organic, but than organic often looks old and tasteless, frozen is sneered at, and then don’t get started on canned. There’s also the list of chemicals, additives, colorings, and sweeteners to avoid… and she could live on oatmeal, but then there’s the dairy issue… let’s not get started on the ill kept chickens who lay the eggs… Start watching things like Food Inc or other food industry awareness films and they can have you seeing everything you put in your mouth as pure poison.
But there’s another poison, which maybe as parents of the next generation we should be more aware of, even more than Barbie and her disproportioned body, the poison is fear and our world is currently filled with it. Unfortunately, although we may have be able to blame the media for the corruption of the image of a woman, we seem to all be falling into the deep pit of fear, media’s fault or not, and our children are picking up on it.

Our children are born into it… no wait conceived into it. We’re scared of what we put into our bodies when we are pregnant, we worry about the birth, we worry about pain relief, we’re scared of vaccinations, or BPA in everything, of laundry soap and of plastic toys… but then we get scared of wooden toys because how do you sterilize them… so then we say let them play in nature and get scared about the dirt, the water and the sun! Let’s not forget about that huge ball of fire in the sky, that Sun. We’re doomed! (plants always seem to deal with the sun rather well, we need to be more like them I think.)

Our children are growing up with talk of the world falling apart all around them. When we were growing up we vaguely heard about nuclear war or problems in places that seemed far from home. Our children are taught about water running out, global warming, and economic crisis. Animals are becoming extinct, people are dying everywhere, and then there’s Monsanto descending like a cloud. Then there are diseases, that to them seem everywhere and unstoppable. I’m not saying that any of this doesn’t exist, I know it does.
I’m saying we’ve made it our focus and our children are learning to be Afraid… very afraid and because of the fear we’re passing down to them, they just might give up hope and leave.
Not my usual uplifting post, I know. But I find it all so fascinating and unbelievable how life on this planet has gone in a short matter of time.

Many of you don’t know this, but my husband and I are musical therapists and we often sing in residential and nursing homes. It’s a wonderful job as we get to connect to older people in a way that many people don’t have a way to. Many a time a dementia patient, who hasn’t talked in years, will start singing along with an old wartime song. It’s quite an exhilarating thing to take part in. We perform a lot of wartime sing along stuff, Pack up your troubles, Kiss me Goodnight Sgt Major etc… and it brings them a lot of joy and connects most of the residents with some of their favourite memories.
Yes, their favourite memories. The ones that bring them back to their selves because it makes them feel so wonderful they connect to Everything They Are. Songs that are written to cheer people up because tomorrow, They May Die.
A woman told me the other day that she loved her life in England during the war when she was a child. Her family would invite the soldiers over, her father would play the piano, and they would have dinner and then all sing. It was like a huge party that happened at least once a week. She sang to her hearts content with us, and when it was over she looked much better than before.
That’s how people lived, there in the middle of chaos, with the threat of bombs being dropped on them, of family members being lost, of horrible atrocities happening, they wrote songs to feel better with, They found reasons to laugh, to love, to dance… to call forth life. They were brave and didn’t let the fear get the better of them and in the end, they could look death in the face, and say whenever it’s meant to be. After all… I hate to say this but 100% of us won’t live forever.

I’m not saying we’re not like this now, but the battles are different. It seems like we’re forgetting to teach our children to LIVE. We’re finding any excuse to be afraid, any excuse to not enjoy ourselves, and any excuse not to trust the Well Being we and they know flow forever to and around us.
We are spiritual beings that occupy these physical bodies for a short while. In the long run it is a spiritual journey we are on. The issues we face here on earth are for the sole purpose of expanding ourselves, and the trick is to BE ourselves, in all our joy and fulfilling life. Like I always say you can’t act from love and fear, therefore LOVE and trust in the life that is flowing with you, in you and around you.
We need to teach our children that the world is well, that the world is powerful and that every cell in her is pure energy that if treated with respect and allowed to shift and change, will do fine. The world may end as we know it, but it also may re-invent itself anew. None of us will live forever in this form, there’s no point trying.

Another thing you may not know is that my husband is a nutritionist… well use to be. We now trust the quantum physic element of things more, but we also teach nutrition basics to our children. Basically, we tell them to eat as naturally as you can as often as you can. Our bodies are complicated machines that can breathe without instruction and can pump blood without any effort from our thoughts. We need to treat them with the utter respect they deserve. Green is the magic color, eat fruit and vegetables, the best you can find. If you can’t get organic, than if you are eating enough of them and drinking enough water, your body can flush out pretty much anything. Greens and natural food and water is your petrol to the machine. Carbs for energy, keep to whole wheat for fibre and make sure you stay regular (up to 5 times a day is seen as natural, did you know that) as that is how your body gets rid of garbage. It can get rid of the stuff we put in it, if we let it.
Dis-ease is our bodies way of letting us know things are out of wack. By listening to our bodies, we can help them.
When asked about the state of the world, I tell them I have faith in her. Our bodies have the ability to heal, why can’t she? When asked about the fish in the ocean, I tell them maybe they are hiding… from all the crazy people on land.
I also tell them to trust in the Spirit of it all. That Worry is using your imagination to create an unhappy future, so use your imagination to heal instead.
“Feel good, and expect it to radiate out of you.” “Remember the law of attraction, and that you are a powerful magnet.” “Life is about joy, and then feeling the off-ness so the next bout of Joy feels even better.”
“Trust…trust that God, or Source, or energy, is swirling and whirling through it all, making it all alright.”
Then after making sure they’ve eaten enough of their cabbage and rice… I give them some homemade chocolate cake... lots of it. ‘Cuz let’s face it, homemade is just better all around, anyway and it can make a person feel SOO GOOD.
Posted by Christina Fletcher at 4:24 PM Stepping Into Your Light: the e-course to rediscover You and release guilt, "shoulds" and overwhelm

Spiritual Kids... the E-course. What is it?

Do you have questions about  Spiritual Kids, the e-course .  I hate to sound salesy, I want to make sure you know about it. Especially in... 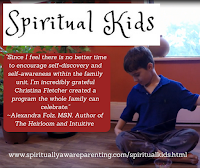